OaksBark has delivered animation projects in HM Prison Shotts and MH Prison Barlinnie as part of the following projects:

An opera created, designed and performed by prisoners of HMP Shotts with Scottish Opera and the Scottish Chamber Orchestra

The Scottish Chamber Orchestra and Scottish Opera have combined forces for the first time to work with the men in HMP Shotts to build an opera from start to finish.

Working with a professional writer, composer, musicians, designers, an animator and stage director over the past four months, everything seen on stage has been created by the men, often with no previous experience.

Round Five is part of Motherwell College’s Inspiring Change project, which is funded by the Scottish Arts Council’s Inspiring Communities Fund. Inspiring Change has provided a systematic and structured programme of high quality arts interventions in music, drama and the visual arts for prisoners in custody in five pilot prisons.

Press article: The Herald – ‘Hitting the high notes with prison opera in the round’

A site-specific poetry and animation project

A partnership project with Motherwell College, conFAB, and the SPS.

Over a two-week period, students at Barllnnle wrote poems and produced animation about 45 John Street In the Merchant City in Glasgow; A site often unnoticed by passersby.

The Merchant City developed from 1750 as a result of wealthy ‘tobacco lords’ who prospered in shipping, tobacco, sugar and tea, amongst other commodities. During the l8th century, Glasgow’s position on the Clyde gave its merchants an advantage over other ports in Britain and Europe for goods coming from the Americas and the Caribbean. 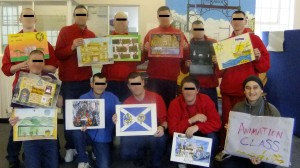 However, as well as supplying tobacco, tropical goods, sugar and rum, it was also part of the slave route from West Africa.  The students researched the history of the site, whilst also learning about various poetic styles. Working alongside lñigo Garrido, they also produced a DVD of their animations with poetry recitals. The project culminated with a live event outside the Glasgow Chambers, during which the animations were projected onto one of the archways of the building for public viewing, 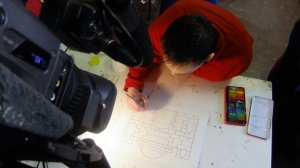